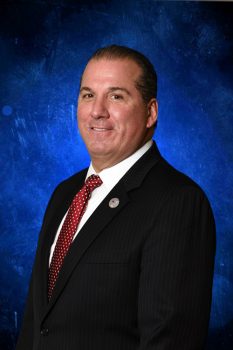 Port Authority PBA President Paul Nunziato was appointed to the Port Authority Police Department in September 1987. During his career he has worked at the majority of PAPD commands including long-term service in the Newark Airport, Central Police Pool and PATH Commands. Paul’s commitment to the PBA began with his election as a Central Police Pool Command delegate and later serving as a PATH Command delegate. Paul was a PATH delegate on September 11, 2001, when 13 PATH police officers were among the 37 Port Authority police officers killed at the World Trade Center.

Paul refers to the delegate position as the most important in the PBA saying, “Our delegates have a difficult job, they must be aware of all the working parts of their command and make sure the command is operating within the provisions of the PBA contract, a contract that is the will of both the PBA and the Port Authority. Delegates are on the front lines providing the PBA with the issues it needs to address.” The experience Paul received as a delegate prepared him to continue to serve the membership as a Trustee, Recording Secretary, Treasurer, Second and First Vice President and, since January 2010, the President.

As a law enforcement union leader of national prominence, Paul understands the stewardship he is entrusted with is part of the long legacy of the Port Authority PBA’s unity, strength and success. A legacy that includes long-term, past PBA presidents Dominick Evangelista and Gus Danese, two legendary PBA leaders Paul calls his mentors. “Dom instilled in me the understanding of strong yet benevolent leadership and guidance while Gus imparted the knowledge of constructive political tactics and relationships,” Paul said while speaking of his mentorship. “Being the president of a law enforcement union, I am keenly aware of the responsibility our members have to the public through the sworn, sacred oath each takes. At the same time the PBA must make every reasonable effort to ensure members are treated fairly and their rights are protected. It is a delicate balance the PBA is faced with each day.”

Paul has received numerous certifications in labor relations, employment law, collective bargaining and organizational leadership. His experience and certifications serve well in his added responsibilities as President of the New Jersey State PBA Local 116 (the PAPBA local), Area Vice President and Chairman of Strategic Planning for the National Association of Police Organizations, the First Vice President of the New York State Association of PBAs and as a Trustee of the Port Authority PBA 9/11 Widows’ and Children’s Fund. He also brings his strong police experience to his office having made approximately 1,000 career arrests and involved in about 1,000 more.

Paul’s love of family; his wife, son and daughter, undoubtedly hold the top spot in his heart. Second are Port Authority and all our nation’s police officers. He is fond of quote, “It is not the critic who counts; not the man who points out how the strong man stumbles, or where the doer of deeds could have done them better. The credit belongs to the man who is actually in the arena, whose face is marred by dust and sweat and blood; who strives valiantly…” These words, Paul believes, should resonate with all when they take a moment to think of the sacrifices made by our police officers as they put others before self.