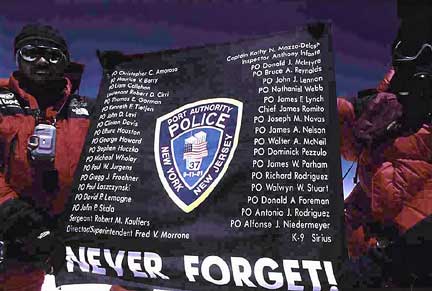 On September 11, the world saw the worst of humanity. In the aftermath of those attacks the world also was witness to some of the greatest acts of heroism and kindness in history. The Twin Towers were owned by the Port Authority of New York and New Jersey, and were patrolled by the Port Authority Police. These officers were cross-trained as structural firefighters. They were the first rescue personnel to begin the evacuation of the then burning buildings. On that day thirty-seven Port Authority Police officers lost their lives. The largest single day loss of life to a police department in U.S. history. 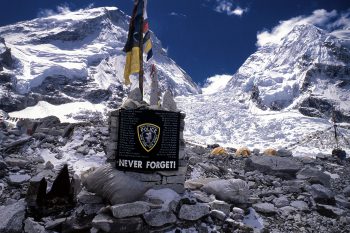 In February a comrade of these police officers contacted Christine Boskoff the owner of Mountain Madness. She was asked if the Mountain Madness 2002 Everest would honor his fallen friends by placing a flag with the names of these brave men and women on the summit. Her response was the Mountain Madness Motto “Make it Happen”. The flag, which was made by Manhattan Sign and Design, a company whose owner Gene Nifenecker was proud to be involved in the project, was shipped to Mountain Madness and carried all the way to the top by the team. 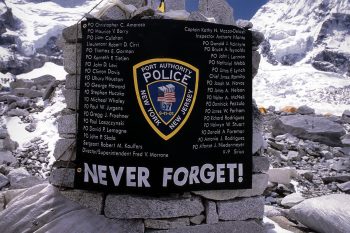 On May 15, the Mountain Madness team placed the flag on the summit. The men and women who were the first to the towers were now on the top of the world. The actions of the many rescue workers on September 11 saved many lives. Those who gave their lives on that day will be remembered by friends and loved ones forever. This small act on the part of the Mountain Madness team only exemplifies the generosity and tremendous honor the country has bestowed upon these men and women. The Port Authority Police and the families of the fallen would like to express their gratitude to the climbers who made this possible. The Port Authority Police and the rescue workers in New York have also have coined a motto, NEVER FORGET.