The Port Authority of NY & NJ Police Department (PAPD) is as a leading law enforcement agency in the America’s fight against crime and terrorism. As one of the nation’s largest police departments it has suffered greatly through its history, experiencing unparalleled sacrifices by its police officers while protecting hundreds of millions of people using Port Authority facilities annually. As the country’s largest, transportation-related police department, concentrating on a variety of transportation modes, it is unique with its bi-state police powers; each Port Authority police officer is a sworn police officer in New York and New Jersey. The PAPD’s long history is one that is rich with accomplishment, selfless service and unabashed pride.

The Port of New York Authority, as it was originally known, was created April 30, 1921, by a Constitutional clause permitting compacts between states, to address and administer the common harbor interests between New Jersey and New York. The creation of the Port Authority marked the first time such Congressional consent was granted. The Port Authority’s area of operation, a bi-state region of approximately 1,500 square miles centered on the Statue of Liberty, became known as the “Port District.” Within the Port District the Port Authority set about acquiring and constructing various transportation facilities to meet the growing commerce and transportation needs of the New York/New Jersey Metropolitan Area. Along with the Port Authority’s growth and mandates came the need for a dedicated police department able to operate in both New York and New Jersey, a new concept, at the time, in American law enforcement.

The creation of the PAPD can be traced to the openings of the Goethals Bridge and Outerbridge Crossing, both connecting Staten Island, NY and New Jersey, on June 29, 1928. In anticipation of the openings, the Port Authority selected 40 men, on June 1, 1928, to police both bridges. Thirty-one of these men were known as Bridgemen while nine supervisors were called Bridgemasters. In 1935 the titles were changed to Police Officer and Sergeant.

As the Port Authority’s growth continued it assumed control, in 1930, of the Holland Tunnel which was operated by two separate commissions in New York and New Jersey. The two commissions employed 199 traffic officers who were merged with the Bridgemen creating the PAPD. The PAPD expanded again with the 1931 opening of the George Washington Bridge and, in 1937, when the Lincoln Tunnel began operations connecting Weehawken, NJ and Mid-Town Manhattan.

Perhaps the PAPD’s largest expansion in the first half of the 20th Century, and one that solidified its identity as a leading law enforcement agency, came in the late 1940s when the Port Authority leased three airports from the cities of Newark, NJ, and New York. Those three airports, Newark Liberty International, LaGuardia and John F. Kennedy International became the country’s largest, single airport system currently handling more than 130 million passengers a year. Each airport required a police command to provide law enforcement services to these “cities within cities.”

Adding to the uniqueness of the PAPD was the assignment of Aircraft Rescue Fire Fighter (ARFF) duties to the PAPD. Port Authority police officers assigned to airport commands are specially trained at the Port Authority Police Academy Rescue Training Center located at John F. Kennedy International Airport as certified Federal Aviation Administration (FAA) Aircraft Rescue Fire Fighters. The PAPD ARFF Unit has been touted by the FAA and the National Transportation Safety Board as a model for the industry. In addition to these three airports, PAPD patrol and ARFF units are assigned to Teterboro Airport in New Jersey, the nation’s busiest general aviation airport.

The PAPD’s most dramatic airport expansion began in the early 1970s as the result of the increase in aircraft hijackings and terrorism by individuals and groups trying to bring attention to their causes. On December 29, 1975, terrorists placed a bomb in a coin-operated locker located in the TWA baggage claim area of LaGuardia Airport’s Central Terminal Building. The bomb detonated killing 11 people and maiming 74 others. The heroic response and work of Port Authority police officers saved the lives of many of the injured. New federal regulations to address these threats led to the PAPD increasing staff at its airport commands by hundreds of police officers who, in addition to their traditional police duties, were now responsible for federal air regulations applying to airport and aircraft safety and security.

In the years after the acquisition of the airports, the 1950s and 1960s saw further Port Authority expansion with the construction of the Port Authority Bus Terminal, the second level of the George Washington Bridge, the third tube of the Lincoln Tunnel and increased development of the Brooklyn Piers and the Ports of Newark and Elizabeth. These capital projects created additional demands on the PAPD and led to further growth in the police department.

The original World Trade Center opened on April 4, 1973, creating a new, downtown financial center. Twenty years later, February 26, 1993, terrorists detonated a truck bomb under the North Tower of the World Trade Center killing six people and injuring hundreds. Again, the selfless, heroic work of the PAPD was instrumental in saving lives and evacuating the complex of thousands of people. Unknown to many was the destruction of the PAPD’s World Trade Center Stationhouse by the blast. Eight short years later, on September 11, 2001, terrorist attacked the World Trade Center once more, killing nearly 3,000 people, including 37 Port Authority police officers, and destroying the complex. The PAPD, along with its law enforcement and public safety partners, performed, what is said to be, the greatest evacuation of people in the history of our nation. The 37 Port Authority police officers killed on September 11, 2001, is the single, largest loss of police officers in the history of American law enforcement. 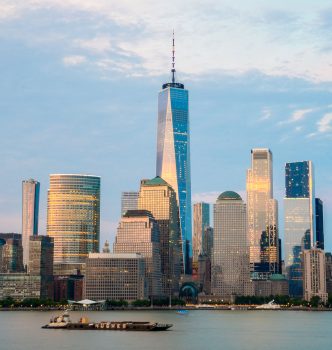 Today the PAPD numbers more than 2,000 police officers who patrol some of America’s most critical transportation infrastructures. Port Authority police officers are specially trained in the Port Authority Police Academy to meet the challenges that threaten these facilities, some of the nation’s highest-profile terror targets. All Port Authority police officers, including special PAPD units such as K9, Emergency Services, Commercial Vehicle Inspections, Criminal Investigations Bureau, Youth Service, Aircraft Rescue Fire Fighter and Counter-Terrorism, strive every day to perform their sacred, sworn duties to protect the people of New York and New Jersey and the traveling public.