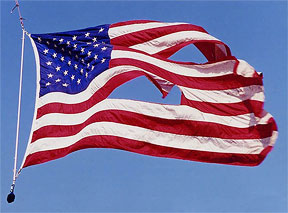 The American flag pictured here was custom made for the Port Authority of New York and New Jersey to withstand the high winds that swirled around the World Trade Center. It was the only flag flying there on September 11, 2001. Three days after the attack, the flag was recovered from beneath the rubble by a member of the National Guard, who planned to have it destroyed in military fashion.

Upon learning of its recovery, the Port Authority Police Department insisted that the flag not be destroyed, but instead released to its custody. The flag was presented to the Port Authority Police Department, and it has been displayed at the memorials and funeral services of the heroes of that department who made the ultimate sacrifice on September 11th.

The flag was displayed at the 2001 World Series, the pre-game show of the 2002 Super Bowl, the 2002 Winter Olympics in Salt Lake City,and the 2002 Men’s and Women’s NCAA Basketball Finals. It was also exhibited at the Smithsonian Institution from April through June 2002 — except for one day when it came back home. On May 31, 2002, at the silent ceremony closing the World Trade Center recovery site, it shared the podium with President George Bush, Secretary of State Colin Powell, Secretary General of the United Nations Kofi Annan, New York City Mayor Michael Bloomberg, New York Governor George Pataki and U.S. Senator Chuck Schumer.

On September 11, 2002, the flag was honored at the National Association of Police Organization’s TOP COPS Awards Ceremony in New York City.