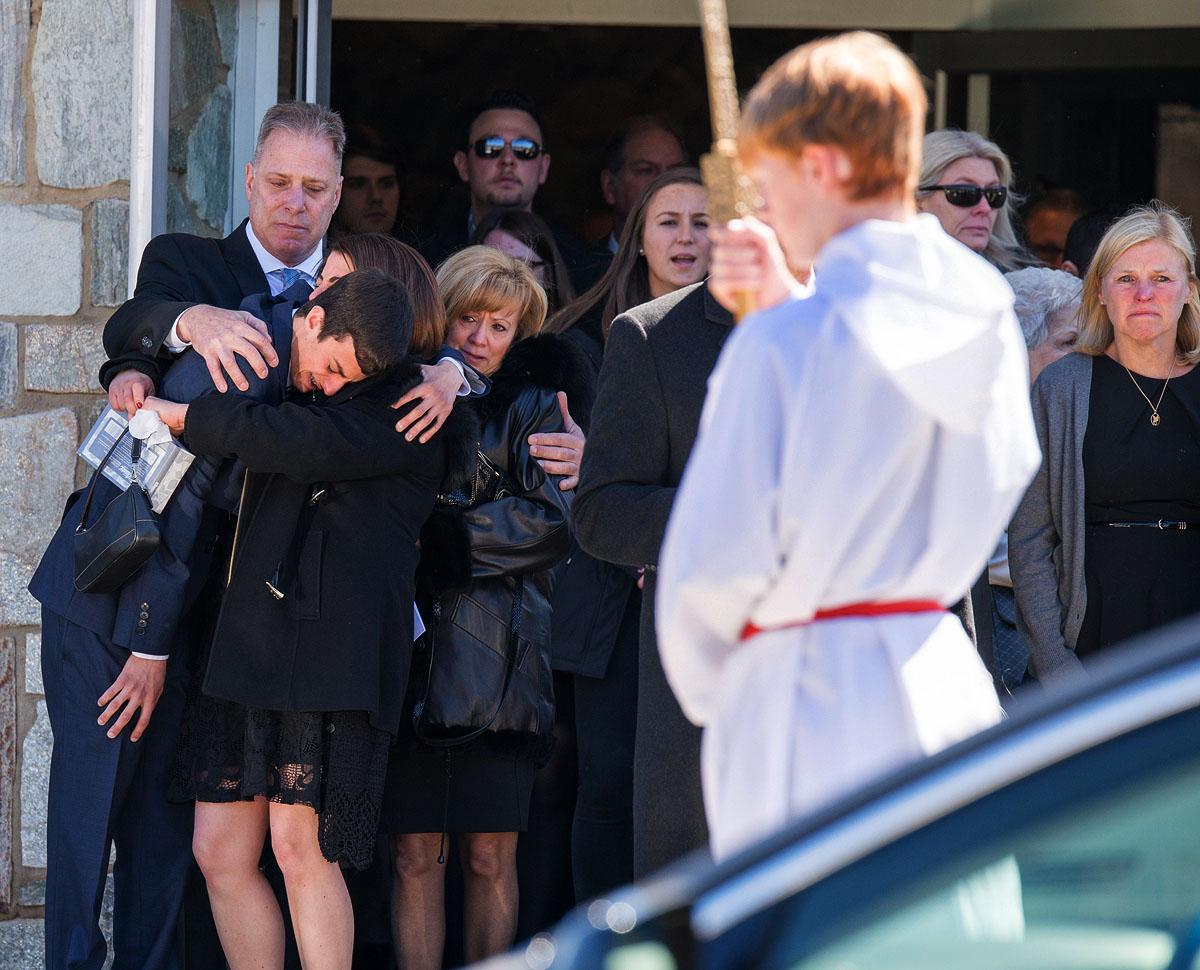 Caitlin Nelson, like her 9/11 hero father 15 years before, died too young — and left a legacy of doing the right thing for others until the end.

Tears flowed and sobs filled St. Helen’s Church at the heartbreaking Saturday sendoff for Nelson, who died last Sunday after choking during a pancake-eating contest at a college charity event.

“Someone once told me that it is not the number of years you live, but what you do with the years you are alive,” her sister Anne Vetri said in a beautiful eulogy. “Caitlin, you touched more lives in this short time on Earth than most people do in a lifetime.”

She noted that Caitlin lives on through the donation of her organs.

“Somewhere locally, a young girl received your kidney today, and a family wept tears of joy at a lung transplant as a result of your generous (gift),” she said.

A lone police bagpiper played, reminiscent of the funeral more than 15 years earlier for Caitlin’s father, who was killed on Sept. 11, 2001 while rescuing trapped workers from the 27th floor of the World Trade Center.

“Just like daddy’s legacy was sacrificing to help others, you saw life as an opportunity to assist those in need,” said Anne.

“You had the unique ability to transform your own loss as a little girl as something positive later in life. Your gentle heart and compassionate soul were always on display.”

Caitlin had once said the bagpipes and smell of incense inevitably brought back memories of her dad’s funeral.

The street outside the church was lined with two dozen Port Authority Police Department vehicles, and officers lined the back wall of the church.

Many of Caitlin’s sorority sisters wore pink ribbon pins in her honor.

Mourners said she lived to help others. She volunteered her time in the fight against child abuse, and mentored children in Newtown, Conn., after the 2012 school massacre. She also worked as a volunteer at America’s Camp, a getaway for kids who lost a parent or sibling during the 9/11 attacks.

Three years earlier in the same church where her family mourned, Caitlin served as maid of honor at her sister Anne’s wedding.

“You were there with me that day, as you were every day with that bright smile and bubbly personality that I will miss so much,” said the sister.

Caitlin’s friend Caitlyn McIntyre read a poem entitled “We Remember Her” before a photo montage of the young woman’s life reduced many mourners to tears — including her sister and mom Roseanne.

Songs by Taylor Swift and the Beatles played in the background during the display.

“She would say goodbye to me by name, something many young people would not do,” he noted. “Caitlin’s life was so holy and saintly, I should just sit down now.”

Anne broke down in sobs as she followed her sister’s coffin out of the church at the end of the service.

“You were the glue that held this family together, the little girl with the chubby cheeks,” the devastated sister said earlier. “Life without you will not be easy, but I know your legacy will live on.

“It is comforting to know that you and daddy will be there for mommy and I every step of the way.”