Search
The four officers with the Port Authority of New York and New Jersey are being hailed as heroes for quickly subduing the suspect in Monday’s explosion at a New York transit hub before he was able to do anything else.
The Port Authority Police Benevolent Association identified the officers as Sean Gallagher, an ex-Marine; Drew M. Preston, a solidier who served in Iraq and Afghanistan; John “Jack” F. Collins, who’s also a lawyer; and Anthony Manfredini, a former Marine and bomb technician.
The officers, from left, Sean Gallagher, Drew M. Preston, John “Jack” F. Collins and Anthony Manfredini.
“Today, four courageous Port Authority police officers risked their lives confronting an armed terrorist to protect others from harm,” Paul Nunziato, the union president, said in a statement Monday.
“I am so thankful there was no loss of life and I could not be prouder of our Port Authority police officers, their actions and dedication to their sworn duty.”
View image on Twitter 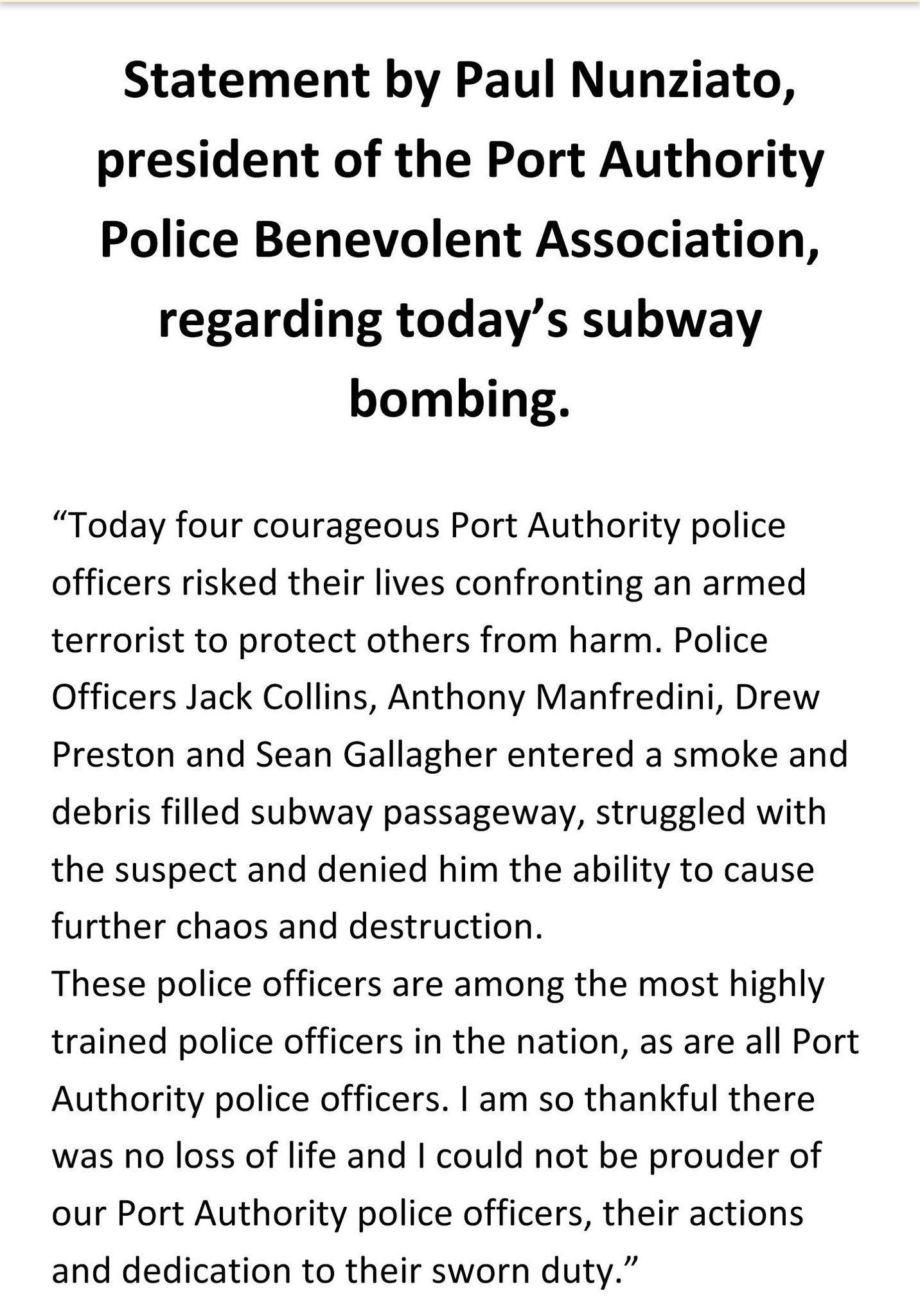 The four officers happened to be assigned to the Port Authority Bus Terminal police command at the right time.
Manfredini was first at the scene — a walkway linking the bus terminal to the subway system, according to Bobby Egbert, an association spokesman.
The officer saw panicked commuters running out of the passageway, Egbert said. He made a radio call and soon the others joined him as smoke and debris filled the tunnel.
Officials say Akayed Ullah , 27, set off a pipe bomb strapped to his chest Monday morning in the underground walkway. Ullah and five others were injured in the blast, which triggered panic in the busy commuter hub during rush hour.
Manfredini encountered the suspect on the floor with what he said appeared to be shrapnel wounds, Egbert said.
The officers saw wires running from the suspect’s jacket to his pants, according to Egbert. Ullah was reaching for a cell phone, which the officers knew from training could be used as a detonator.
After a brief struggle, they managed to separate Ullah from his phone, Egbert said.
Once Ullah was in custody, the officers began to evacuate commuters safely.
Members of the bomb squad cleared the suspect of any additional explosive devices before he was transported to a hospital, according to Egbert.
Collins arrested Ullah at gunpoint with the help of the other officers, CNN affiliate WABC reported. He was working his regular assignment on the lookout for child trafficking at the bus terminal.
Port Authority Chairman Kevin O’Toole praised the four officers for swiftly putting an end to the situation.
“Thanks to the quick response of these brave Port Authority Police officers, the suspect was apprehended, there were no serious injuries and the PABT was secured without further incident,” O’Toole said, according to WABC. “Our officers responded immediately and put themselves in harm’s way to protect the public.”
Original Article