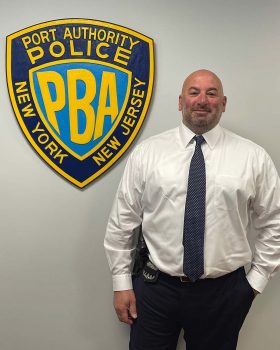 President Frank Conti has held elected Port Authority Police Benevolent Association positions since 2000, the year he was elected a delegate by the Port Authority Bus Terminal Command. Frank, who was appointed to the Port Authority Police Department on June 27, 1994, has also served the PAPBA as a Trustee, Financial Secretary and First Vice President. He was elected president in the 2021 PBA General Elections and assumed the presidency on January 1, 2022. In addition to his patrol assignments at JFK Airport, the Central Police Pool and the Port Authority Bus Terminal Commands, Frank served as a K9 officer in the PAPD’s Special Operations Division; first partnered with K9 Riko (deceased) and then with K9 Derik, who enjoyed his retirement with the Conti family.

Frank believes essential to the attitude of our membership is Aristotle’s quote, “The whole is greater than the sum of its parts”.

“Together in unity we are strongest,” Frank says. “To each and every PAPBA member, YOU ARE THE UNION.”