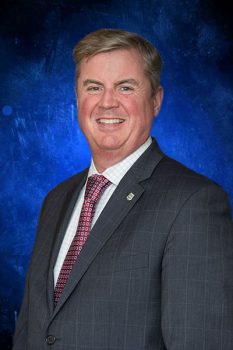 John McAusland serves as the General Counsel of the Port Authority Police Benevolent Association, Inc. Mr. McAusland’s legal expertise also benefits his boutique law firm which is dedicated to the representation of unions and employees before state and federal courts and administrative agencies in both New Jersey and New York.

Mr. McAusland is admitted to practice before the bars of New Jersey and New York. He is a member of the New Jersey State Bar Association and the sections of Labor and Employment Law and Administrative Law. He regularly appears before the Public Employment Relations Commission and the Office of Administrative Law in New Jersey. Mr. McAusland concentrates his practice on the representation of employees in labor and employment issues, but also works on appellate matters, appearing before the New Jersey Supreme Court and Superior Court, Appellate Division. He has been a participating attorney in the New Jersey State Policemen’s Benevolent Association Legal Protection Plan since 1998.

Prior to working with the Port Authority PBA, Mr. McAusland was an associate in the firm of Alfred G. Osterweil, a pioneer in the field of public sector labor law in the State of New Jersey.